Qingdao, China: Sleeping Everywhere But in a Motel

WE HADN’T SLEPT longer than an hour when the disinterested, pale-shirted, tired-eyed Chinese airport security guard padded over and shook us awake. I knew immediately that our plan had failed. When you travel like this, very rarely do things go as expected.

Flustered by interrupted sleep at 1:30 a.m. and a lack of ability in any Chinese language, we tried to explain, to plead that we had nowhere to go and a flight leaving in only nine hours. We didn’t have enough cash for a hotel, let alone enough to hire a taxi to drive us to one; Qingdao International, for all its efficiency, is squat in the middle of nowhere. 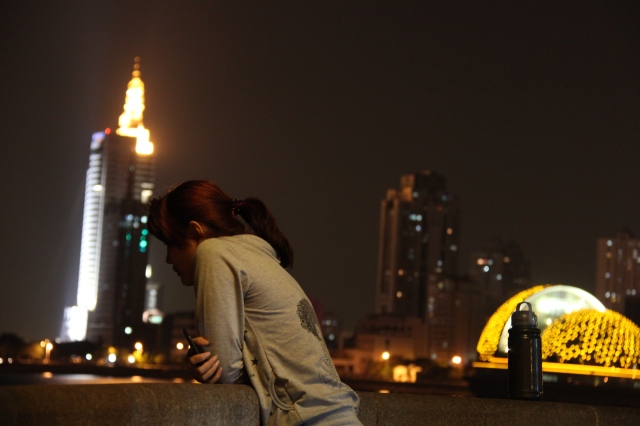 But the guard would hear none of it. Instead, he listened to two Chinese girls behind us, pleading the same case; they’d been sleeping, too, on the conjoined metal bench behind us, hoping to score a free night’s rest before their domestic flight home the next morning.

The shorter one turned to me. “We cannot sleep here,” she told us.

Yeah, I replied. I got that.

Together, we were led out of the airport, my partner and I clinging to the Chinese girls like children lost in a mall. Even combined, we didn’t have enough cash to pay for a hotel, or even time to justify one, and the late September air was too cold and windy to try impromptu camping. 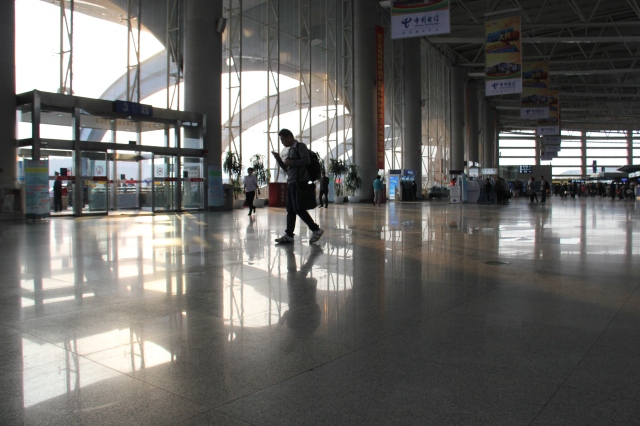 Instead we decided, after groggy deliberation, to hail a taxi to a nearby 24-hour KFC. That, until the airport’s reopening four hours later, was to be our hotel.

In Qingdao, if not all of China, this is not uncommon. We’d seen dozens of kids sleeping in the all-night McDonalds earlier, for seemingly lack of anything else to do after 11 o’clock on a Sunday night. My partner and I had wandered ourselves into a McDonalds that night for a late-night coffee after a dinner of street skewers and soup; we sat opposite a couple of Chinese tourists who looked to be plotting their next day’s route. They stood out for the basic fact that they were, by some miracle, awake, surrounded by dozens of kids flatly head-on-desk asleep. Virtually no one was eating.

Consider this for a moment: a legion of McDonalds teenagers, and not a Big Mac in sight. Travel has a way of doing this, of giving you what you don’t want and reversing your expectations. KFC becomes a hotel; the street, meanwhile, is the obvious restaurant.

Even getting to Qingdao wasn’t what we expected. We’d taken the train after three days in Beijing (which, to digress, is an engulfing mammoth of a city with no downtown building smaller than an amusement park, and is terrifying in contrast to Qingdao’s amiable Germanic clock towers and brick streets, all thankfully normal-sized), and quickly discovered that the train had robbed us of our planned hotel money when we had unwittingly agreed to first-class train tickets. Which, admittedly, isn’t the worst way to discover you’ve lost $30, but still caused a problem for the night to come. 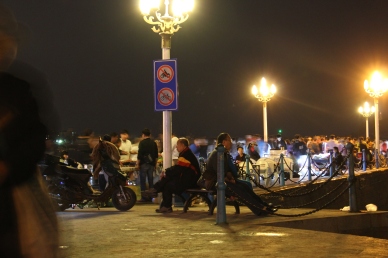 Turns out almost every hotel was booked up, anyway.

Forced to crash at the airport, we were left with 200 yuan. This can go a long way in one Chinese night. We felt invited to explore the city’s beachside market, lined with vendors selling wire figures, shell earrings and balls of glop that smush up against whatever you throw them at then re-form into balls seconds later. We hopped along wet rocks covered in fungus, beside families searching for seashells at 10:30 p.m. Buskers played guitars and sang under yellow lamplight in the chilled mid-autumn air. Gruff men in thin shirts fired up skewers of pork and onion on the sidewalks, and the smell of charred meat filled the streets and piqued our noses. The city felt alive.

We hailed a taxi and rode to the airport 30 minutes away, drifting off to sleep in the backseat. By 12:30, we had brushed our teeth and worriedly noticed how few people were there. But what of it? We were tired. We crashed.

Consider this for a moment: a legion of McDonalds teenagers, and not a Big Mac in sight. Travel has a way of doing this, of giving you what you don’t want and reversing your expectations. KFC becomes a hotel; the street, meanwhile, is the obvious restaurant.

We wound up in a taxi again, of course, just an hour and a half later, and arrived at the illustrious KFC. Our new Chinese friends, simultaneously the kindest and least friendly people I’d ever met (“My name’s Michael,” I offered, which was responded to with a wholeheartedly disinterested, “Okay”), ordered a few five-yuan pork congees (KFC knows their market) and promptly passed out.

I can’t say how many times we woke up that night—it was only a four-hour span, but felt much longer. Every time I did, the rounder-faced of the two was vampirically awake, if not hunched over her comic book or playing a racing on her iPhone. She was dressed as if seated front-row at a Fall Out Boy concert, with a blue denim jacket, graffiti-covered Converse shoes and black skinny jeans rolled up to her ankles. Her friend was quieter, a perpetually grumpy-looking girl with a naturally furrowed brow. In the KFC, she barely sat up.

So we saw everyone who passed through that lonely KFC that night. Who are these people? One downtrodden man in a blue t-shirt and ill-fitting black jeans quietly sat looked out the window, into pure blackness, sipping coffee for at least 30 minutes. Three bro-types in windbreakers strutted in, purses under arms, and woke us up at 3:00 with uncontrolled laughing, slurping their greasy chicken wings. By 4:30, two women in oversized pink jackets quietly entered with a toddler girl, who gravitated to the fast food joint’s desolate, unlit playroom while the adults slouched in a nearby corridor, chatting quietly and charging their smartphones.

By 5:30, we were grateful and eager to escape, to sleep our last few hours at the elusive Qingdao International and, with a measly 100 yuan remaining, be compelled to spend it on random airport shit. One stiff doll, a box of panda-head-shaped cookies and some dried plums later, our plane’s final boarding call sounded.“But we have 15 yuan left!” I cried out. My partner and I hurried to the nearest shop, where I asked what they had for under 15 yuan. A bottle of water, at least?

No chance. “That’s 20 yuan,” the clerk replied, as if I’d been an idiot for even asking.

In retrospect, I shouldn’t have been surprised to walk out clutching an 11-yuan Tsingtao beer. This is China, after all. Blame it on my expectations.

This article was originally published by GoMad Nomad in February, 2013.

← Taiwan: Gearing Up for the Chinese New Year (Photo Essay)
Taitung, Taiwan: Wherein Nearly Everything Goes Wrong (or: How I Learned to Never Stop Worrying and Love Itineraries) →