Ways to Pass Time on a Train 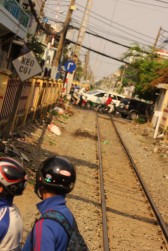 I DON’T WANT TO COUNT the number of hours I’ve spent riding trains. More than I care to admit, though enough to brag about distances — 475 kilometers in Vietnam, over 600 in Thailand, not to mention that idiotically naive ride from Halifax to Toronto, nearly 1,000 in a single haul.

I’m not sure why travellers love trains. They’re polarizing transport: whereas buses are almost universally shitty, and planes comparatively luxurious, trains are kind of hit-or-miss. If you shell out enough for upper-class seats, they’re roomy, well-lit and pretty safe. Conversely, you can pay next to nothing and have the worst ride of your life.

My friend Adrian once summed it up well while we were gazing at a shot of rickety tracks passing by for a documentary we were working on: “Trains are just romantic.” It’s inexplicable. They really are.

Regardless, train trips are usually long, and staring out the window can only inspire you for so long. So how do you pass time on a train? What do you do for x number of hours aside from reading and listening to music?

I jot down dozens of pages’ worth of notes that rarely turn into stories, but are fun to pass the time and perfect my cryptically shitty penmanship. Now I can experience the joy of reliving that train from Bangkok down to Nakhon Si Thammarat, where four tattooed Germans in tank tops and panama hats were screaming out “One more beer!” to each other and, unfortunately, the whole rest of the train.

I am a compulsive planner, and despite my best efforts to ease off the anxiety and, I suppose, go with the flow, I find myself at the best of times sketching out routes and making lists and daydreaming of not just the sights I will soon see, but the order in which I will see them. Which is, um, maybe a bit unusual, but it allows for a great balance between excessive planning and having no itinerary whatsoever.

You know what’s easier than coming home and being overwhelmed by 2,000 shots, half of which are blurry? Yeah.

When I was going south from Taipei to anywhere, I struck up a conversation with the dude sitting next to me on which cities he thought I should go to. I didn’t get a chance to take him up on every recommendation, but it gave him a chance to practice his English, and got me acquainted with the country a bit better

5. Recharge every battery you have.

I’m talking camera, phone and — at the risk of sounding like a yogi — mind. This is kind of an obvious option, but I mention it as actually more of an endorsement for trains. Airports cause me to break out in hives of anxiety; busses are cramped and sometimes ditch me and my girlfriend in the middle of a remote mountain. But trains are just… nice. As someone who loves the feeling of movement — the sense that I’m being productive without actually doing anything — trains are the optimal mind-relaxant.