Stories Left Behind in Borneo

09/20/2013 · by mfraiman · in Brunei, Malaysia, South & SE Asia · Leave a comment
FROM BANDAR SERI BEGAWAN TO KUCHING, crossing all of Sarawak and most of Brunei, was more an experiment in bus patience than intense jungle adventure. V and I are not wild rainforest trekkers (can I use “jungle” and “rainforest” interchangeably like that?), though we did venture out into the bush once in Miri, which was itself an unforgettable story I’m still trying to write in full; mostly we spent our hours on Borneo searching for roti breads in a part of Malaysia that is distinctly of Chinese heritage. (Quotes from V: “I don’t want Chinese food for breakfast”; later, “I think Indian food is my favourite food after pizza.”)
We did not get a chance to talk to as many locals as either of us would have liked; certainly not as many as we did in Indonesia; this says nothing of the people’s friendliness, but more that, after two weeks of solid travel, I think we started to feel the wear of it all. Hopefully now, here, in Penang, we can fix that. 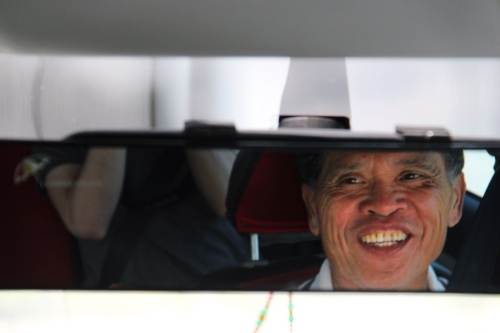 Robert offered to drive us to Lambir Hills National Park, 30km south of Miri, in Malaysia, for a bargain price of 40 ringgit, which is a quarter of the 160 ringgit a real taxi driver would charge. This is because Robert isn’t a real taxi driver — he’s a part-time phone operator and former cop who lives alone on 600 ringgit a month. (That’s around $200, and a fraction of even Malaysian minimum wage.) His story is not a sobby one; in fact, he spoke to us frankly and critically of how his country has changed since he was a kid, back in the days when rice cost 20 cents a kilo and his village only had two or three cars to go around. “Now, every house, two or three cars,” he told us, still marvelling at the prosperity of economic growth.

2. The Guards of the Sultan of Brunei 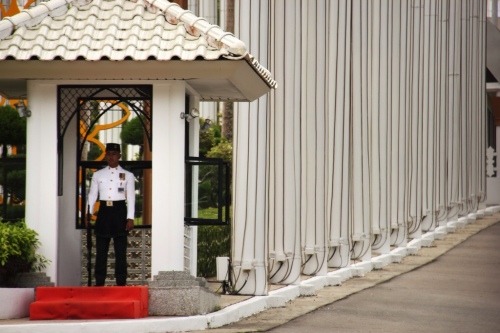 When we arrived at the gate of the Istana Nurul Iman, arguably the largest and most expensive residential palace in the world, we were greeted by a portly guard with a shiny vest and sharp eyebrows. He politely told us where the best spot to take photos was from — a park 20 minutes down the road from the front gate — and waited with V while I tried to find an interesting photo angle through the gate. When he found out V was American, he informed her, proudly, that Obama was coming to visit next month. That opened him up a bit. He then told us that his job, outside the palace, is significantly easier than the job he used to have, inside the palace, like that of the dude pictured above. Apparently those guys have to stand perfectly still for hours while doofuses like me take pictures. Then again, our new friend didn’t even get a chair to sit on, so maybe it’s not such a better deal.

The Sarawak Museum, in Kuching, the state’s capital, has on display a yellowed newspaper clipping regarding boat drivers on the Sarawak River. “Even today,” the clipping read, “the price remains the same — 10 sens for a trip across!” V and I rolled our eyes at its clear outdatedness, and later discovered the price had obviously jumped — but only to 40 sens. When the elderly man pushed the boat off, we were impressed that he was going to paddle the whole way, until he reached behind him, pulled a rope and initiated the motor that delivered us across in under a minute. I guess some traditions are better left to history.

We arrived in Kuching just in time for the mid-autumn festival, celebrated each September by looking at shiny lanterns and giving and receiving delicious moon cakes. There are dozens of shops lining the streets, their pastry selection spilling out onto the sidewalk beneath their wooden blinds. One man, who moved here with only a few ringgit and two boxes of cakes 20 years ago, happily toured us through his store, telling us which ones were good, which have long since sold out, and that, predictably, “Expensive, but nice. Cheap price, not as good.” His technique must be working, because he claims he sold over 50 of his enormous 2.5-kilo moon cakes that day alone, leaving only four in stock. We left with an unnecessarily ornamental cookie which was, we had to admit, both festive and tasty.