IF YOU HAVE ANY COMMON SENSE, and any money at all, Cambodia is a remarkably easy country to travel through. This is not because the roads are smooth (they’re not) or the touts polite (they’re obnoxious). It is, as it often is, the people who are making our lives easier, albeit for a price, further albeit for a small one.

Horror stories upheld by statistics of crime and drug abuse precede the nation’s reputation; a brutal history and current heated political stage, topped by one protester death a few weeks back, cement it as a “dangerous place”. V and I are slowly learning that this is not entirely fair, but nonetheless still clutch our personal items on the street. 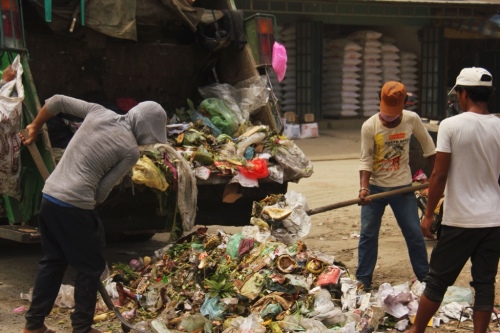 Our arrival was pretty magnificent, and I’m sure an altogether fluke. Our Air Asia flight was 10 minutes early (I have only ever arrived 10 minutes early or an hour late with Air Asia; I cannot recall ever being simply on time), after which we abided by Wikitravel’s advice and walked past the airport fence to find the cheaper $5 tuk-tuks. We were surprised by how nice the vehicles looked; with wooden bannister edges and retractable red drapes, they resemble a fleet of cheap Victorian carriages.

We asked to be taken to a $20-$30 hotel. The ride was long but charming, the sun setting behind us through the smog. We passed many armed guards, police officers and soldiers, mostly populating the wide lawns around the large government buildings. It is so far cleaner than we remember Ho Chi Minh City being, and nicer, geographically and architecturally, than Vientiane. 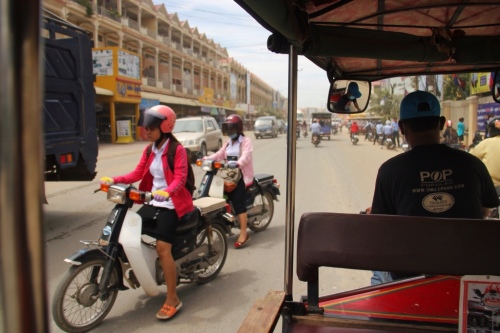 Our driver delivered us to the Queen Wood Hotel, a nine-story-tall renovated colonial French building about a block from the river. We walked inside to learn that a room was $40, and I did that thing couples do, probably annoyingly, where I mumbled quietly to V that it was a bit out of our range and we could find something around the corner. But the woman behind the counter was sharper than I thought.

“What are you saying?” she asked. “You can tell me,” and I told her our price range.

“Okay, so we give you discount, 30 dollars,” she replied, agreeing to the easiest and most unintentional barter of my life.

For 30 bucks, the Queen Wood is an outstanding hotel. They have a rooftop swimming pool, patient and attentive service, and are able to book just about any bus or boat you could want; they offer a free buffet breakfast and their rooms are clean. When we arrived, our towels were folded up like flowers on our bed.

I am told Khmer hospitality is a thing, and this may be proof of it, because all the staff seemed just too eager, too accommodating. I asked how new the hotel was, and our bus boy, a skinny kid with a boyish face and big poofy black hair, told us it was six-months-old, the sister hotel of the owner’s primary location in Siem Reap. The newness shows.

Across the street sits a family’s house-cum-restaurant. They fry up dishes of chicken, beef and some local specialty called lok lak, chewy beef cubes in delectable thick gravy sauce, served with sliced green tomatoes, a fried egg and a lime-based sauce of garlic and black and chili peppers. The father took our order, left on his motorbike, and returned hastily with a styrofoam carton, saying, “Just one minute, sir”—I suspect he bought some extra meat for us. Behind him, his wife helped prepare the food, and their children ran playing, half-naked with their shaggy white dog. Once again, the service was commendable, and the atmosphere homely; it was one of the few moments during this trip I felt at peace.

The cynic my parents raised is still waiting for the other shoe to drop—or be stolen, so to speak. But combined with $1 baguette sandwiches and $0.50 beers, it is difficult to resist how much this country is just so clearly trying to make me feel comfortable.