Chiang Mai’s “Old City” is Anything But

WE ARRIVED IN CHIANG MAI to get away from Bangkok—its hefty costs, its slimy touts, its unnavigable streets and invasive mall culture. Chiang Mai, we were led to believe, would be different, calmer, more authentic and inviting. If it weren’t for the all the expats and tourists who’ve inherited the centre of it, forcing any sensible tourists to migrate farther and farther out into the beautiful rural surroundings, I could imagine that the inner city, which does indeed feel a bit small town-ish, might have retained this humble charm. Things being as they are, we recommend that if you want to enjoy Chiang Mai, you stay as far from Chiang Mai as possible.

First, a technical note: Anyone travelling to Chiang Mai in the near future (that is, until October 31, 2013) should note that trains do not run to the vibrant northern capital because of track repairs; we took a night train as far north as the sleepy industrial town of Uttaradit, which, for the record, has done absolutely nothing to increase its obvious influx of tourists this month, but is also home to coffee stands that serve brews not in cups but in absurd plastic bags the size of a three-year-old’s head, and from there boarded a bus to Chiang Mai itself.

We found a lovely and shockingly affordable hotel in the corner of Chiang Mai’s central “Old City”, a once-walled-off square fortress town, capital to the ancient Lanna Kingdom and home to dozens of towering wat spires. To call it the “Old City” is something of a misnomer. There is very little old about it. Every block is filled with bikes for rent, dollar-laundry services, Western cafes, expat bars and travel services to outside the city. It is a barracks of tourism, from which we are expected to launch our days’ journeys and return home for a cup of tea. It is nothing like, to give a fair comparison, Bali’s Disneyland of Ubud, in which everyone acts like they’re paid to be culturally authentic a la some twisted Truman Show, but which at least retains some level of perverse authenticity by way of its daily Hindu rituals, Balinese dances and strictly traditional architecture; in our first 12 hours here I have scarcely seen a Thai person even eating a meal. Everyone here is “in the business”, and it is profoundly depressing.

We escaped after two days into the mountains of the southwest, at a quirky resort named Huarn Jana, nestled in a valley of Doi Suthep National Park. We figured that we’ve seen enough ancient temples in the last month to certify ourselves as members of the UNESCO selection committee, and that it is now time to relax among vibrant rice paddies and rolling mountains. 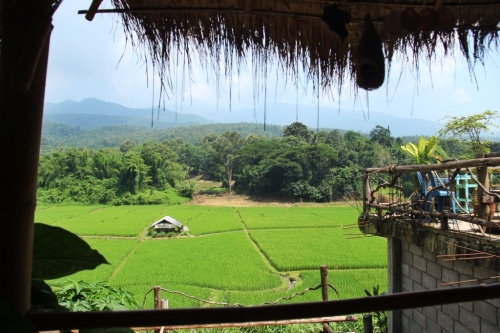 The difference in attitudes here is immediately obvious. Service, in particular, is noticeably warmer: we were the only diners at the hotel restaurant, save for a woman paid to sing karaoke and a man drinking beer alone. After we succumbed to joining the woman onstage for a bit of Korean noraebang nostalgia, the lonely man stood up and sang to us, somewhat drunkenly, a few English classics. He turned out to be the resort’s general manager, and we spent the next hour singing to each other and drinking, unsure of whether he was trying to impress us or vice versa.

The next morning, we asked if we could rent the bikes sitting at reception.

The mountain scenery is predictably stunning and unspoiled. During our ride, we stopped for lunch at a roadside restaurant for dollar-smoothies and laap, a local specialty of spicy minced pork, green beans and cucumber. Beside us sat a retired Israeli-American and his local girlfriend. We quickly began chatting, and he told us all about the mountains’ hidden gems, temples, waterfalls. I asked if he ever got bored living so far from the rest of the city, away from the Western cafes, English speakers and international food.

“I’ve been here three years,” he replied. “Not for a second.”

← The Best Bread in Bangkok, And, Perhaps, The World
Woody Elephant Camp and the Lesser of Some Number of Evils →