WE DEPARTED THE MAINLAND of Southeast Asia with some regret, having not met as many locals as we’d normally like. I also didn’t get as many good photos of the ones we did talk to, which you might notice below. This is because the conversations happened spontaneously, when I wasnt preared for them, which, in some ways, made each a little more engaging, and I less distracted. We spent two weeks in three countries and seven cities, each with vastly different tastes, histories and architecture. It’s nice to be able to put the camera down every so often and tackle each nation, each town, each person, face-to-face. (Which is really just my way of saying, Sorry for the shitty photos.)

There’s an international food court near the Cheong Fatt Tze Mansion in George Town, Penang. Near the eastern entrance, a woman named Nellie sells home-baked cakes that are incomparably delicious. Baked with fresh fruits, they are beautifully effervescent, and V and I first tried them this last winter during our first visit to the UNESCO heritage city; the cakes were tender and perfumey and we went back hours later for seconds. Nellie, if you’re somehow reading this: WHY WERE YOU NOT AT YOUR STALL ALL THREE DAYS WE WENT TO VISIT YOU IN SEPTEMBER? We wanted to give you money, Nellie, money in exchange for cakes, and instead your stall remained cold and vacant, each and every time. We’re just a little hurt now.

Under a bridge near Kuala Lumpur’s Chan Sow Lin LRT station, there is an outdoor karaoke stage surrounded by food stalls. Walk under the strobing disco lights and you’ll meet a middle-aged, raspy-voiced Malaysian man at its helm. “Hey guys, I’m the best composer in the world,” he told us, shaking our hands. “Call me Mr. Song.” Mr. Song is a caricature of a disco jockey—a big black winter hat almost entirely covers his squinty eyes and thin rectangular glasses, and his proud ambition is to use the karaoke gig as a “launching pad” for his songwriting career. He was especially eager to continue our relationship when he found out I was a writer. He is convinced that the mini-album he has planned with “cause a sensation” in the Malay music world: “Songs From Under the Bridge,” he calls it. Curious and skeptical, I gave him my email address. He has yet to make contact.

3. The Crafty Kids of Cambodia 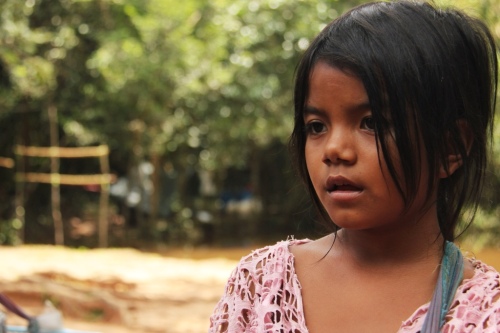 I did not get this boy’s name, nor his photograph, since he approached us unexpectedly at 11 p.m. in downtown Phnom Penh as we were enjoying cheap beer by the riverside. He had a young face and wispy voice, and wanted us to buy one of his books—copies of Lonely Planet, Cambodian books, travel tales like Into The Wild. The Boy studies English in school, and his marks must be phenomenal, because, once we got him past the “Miss, please buy one” nonsense, he actually opened up a fair bit. This is, of course, assuming he is not a clever little liar; he might be 14-years-old, his father may indeed be dead, his mother probably does sell cheap bracelets. He’s sharp: I told him to go bug the man with long curly hair a few tables away, but The Boy shook his head. “He lives here,” he said. “I see him every day.” V was interested in one of the books, and the budding businessman proposed a deal: rock-paper-scissors. If we win, we can buy it for $3; if he wins, we pay five. When V won, The Boy replied, “Oh, shit.”

Every Saturday and Sunday, a group of men and women bring their pet gophers to the park outside Bangkok’s famous Chatuchak Weekend Market. They stick pegs down into the ground, tie the gophers’ leashes to the pegs and enjoy an afternoon picnic. Many of the gophers are dressed up in gopher-sized tuxedos or sweaters. Heunshee is a gopher wearing a 150-baht witch hat (pictured above), of which she has two. Sometimes the gophers escape and their owners yelp and run after them, but mostly people just sit on picnic blankets, eat food and take photos of gophers for several hours until the sun goes down and everyone goes home.

5. What I Hate Most About Chiang Mai 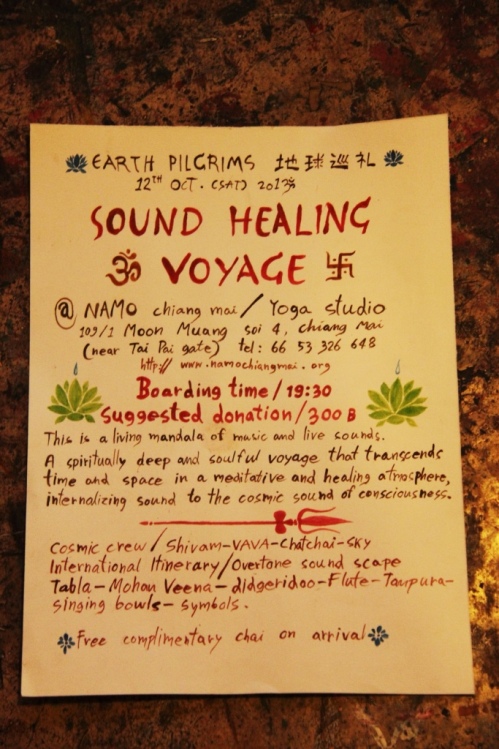 With that kind of salesmanship, I’m surprised they even had to mention the complimentary chai at the end. (All joking aside, I have no idea what half of these words mean, but I’m sure I’d hate them as much as I hate the phrase “living mandala”.)

← Woody Elephant Camp and the Lesser of Some Number of Evils
The Two Indias: Of Rules and Chaos →