THE FIRST THING TO GIVE UP in Iceland’s December is the sun, and with it the loss of humanity’s very conception of time itself. Darkness shrouds the jagged island for 20 hours a day; the sun peeks out only briefly between 11 and 3 o’clock, which forces locals to reconfigure “morning” as a painfully taunting three-hour sunrise. Rising at daybreak—that very primal notion that dictates how civilisation functions—is worthless. You rise when you will yourself to rise.

You also need to change the way your brain works. By 6 p.m., the mental struggle to stay alert through so many hours of darkness throws me, at least, back to my teenage summer months of staying up until 3 a.m., elongating cold and empty hours that most logical people spend sleeping. By 7 I feel exhausted, but only because my brain is convinced I should be. 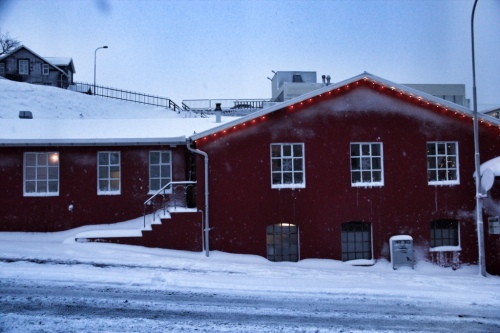 It’s a shame, too, because there are still some things to do in the evening. My German host invited me to a natural hot spring swimming pool a few kilometres outside of Akureyri, and the nonsense temperature shifts from one degree below freezing to a scalding 45 nearly made me faint. But this is a very Nordic thing to do, and it’s definitively wintery.

The nicest thing about Iceland in December is that everyone here is totally aware of how much it sucks. The communal sympathy here is astounding, and the sense of optimism is genuinely uplifting. Everyone is clasping their hands together, waiting for Dec. 21 to come and go—the winter solstice, the shortest day of the year. “These are dark days here,” an old lawyer told me on a rural bus in the north, as we pummelled through the morning-night. “Tomorrow, it will change.”

And then there’s Christmas, which is so omnipresent that it makes the Viennese look like pagans. Houses adorn fairy lights with such uniform gusto I was convinced that the government paid a truck driver to wheel up to each house, hand out lights, and kindly remind families that if their decorations were not garishly visible by Dec. 1 they would receive a 100,000-krona fine.

Also, can we talk about the Yule Lads? These are 13 dudes, centuries older than Santa, who, according to various tellings of Icelandic lore, skip down the mountains during Christmas and leave gifts in the shoes of nice children; naughty kids get pranked, or are left rotting potatoes, or are simply kidnapped and eaten alive. They have weirdly specific names like Door-Slammer, Bowl-Licker and Meat-Hook. (He’s the one that steals meat with a hook, FYI.) Their parents are notorious trolls who also, I think, consume the flesh of misbehaving children. Their sort-of pet is a horrifically giant and scraggly black Yule Cat that also murders and eats children, but this time it’s just children who don’t receive new clothes for Christmas. Conveniently, the Yule Cat has since been appropriated by retailers for advertising means. “Keep the Yule Cat happy,” one company advertises, before suggesting you buy some $200 wool sweater.

Okay, so Icelandic folklore is weird. Now it’s mostly kitschy books and stuff, right? Sort of: the Lads have been globalised into benevolent Santas, and just as dressing up as Santa and putting up with kids has become a living in malls across America, so too has dressing up as skinny Santa spinoffs and driving around the country in bright red hatchbacks with oversized gift-wrapped boxes tied to the roofs become an annual job for anyone trying to make a few extra holiday bucks.

They are basically festive mailmen. I watched one dude in Reykjavik, after he delivered his package, detour from his car by way of two blonde women walking down the street. He approached, but they quickly sped up in apparent disgust and left him behind. Dejected, he slung his head low, returned to his car and sat down next to his coworker, who had long since taken off his iconic hat and beard, and who was sitting depressedly with his face in his hands, pictured below. 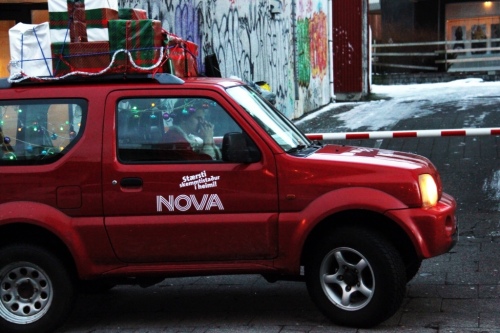