THE TORRENTIAL DOWNPOUR DETERRED US, but nobody surrendered: at 6 p.m., as scheduled, our food tour guide met us on a busy Kolkota corner, in front of a meek electronics store surrounded by scaffolding. I wasn’t sure you’d make it, she told us. We thought the same about her. In the end, it turned out, food can cause anyone to brave a storm.

And she was serious about it. Her name was Srotswini, a young copywriter with dark glasses and fair skin who offered harshly candid opinions about not just every food shop we visited on our tour, but also the ones we didn’t. “That restaurant, ‘Oh! Calcutta’, is very overpriced,” she said flatly of the swanky and acclaimed Bengali restaurant we’d lunched at hours earlier. “Don’t get me wrong, the food is very good. But it is very expensive.” 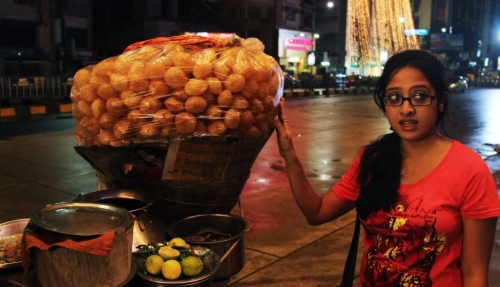 Price would not be an issue that evening. Kolkata Food Tours has been operating for just a few months, and Srotswini is one of only a handful of volunteers who run the variety of courses they offer, but they keep their services free (“Of course,” their website says, “tips help keep us doing this”), and the menus are cheap. Our night consisted entirely of street-style snacks with optional hygiene, starting with 20-cent samosas at a lively storefront called the Tasty Corner. Smooth and crunchy on the outside, the samosas were filled with a rich and creamy paste mixed of lentils, cinnamon and a myriad other spices. We were nearly full after just one.

“Kolkata is the street food capital of India,” she continued as we walked to the next spot. Nowhere else on the subcontinent, she assured us, can one find so many people of different classes dipping soft idly into chickpea curries, tearing off crispy sheets of fried dosa or munching greasy lentil cookies with a clay cup of chai, all dangerously close to the rickety ancient yellow taxicabs recklessly speeding by. The city’s cuisine has traditionally been Bengali-centric, though Srotswini was quick to point out that our tour contained a culturally variety.

Our next stop, for a snack known only to locals and particularly daring travellers, was fuchka, a difficult one to swallow. The vendor grabbed two hollow crispy fried balls, popped holes in the tops with his thumbs, scooped a spicy potato mush in and dipped the whole thing into spiced tamarind water. We were expected to down the whole ball in a single go, but the combination of swallowing a fistful of probably dirty water and mashed potatoes would seem tricky even for the most experienced Indian glutton. We only ate a portion and moved on.

The path was then interrupted by a parade of flashing neon colours and dozens of bagpipes blaring “Jingle Bells”. V and I were baffled; Srotswini shrugged it off. “You can see the British colonial impact,” she said as we dodged through the horns to find our confectionary shop, Sen Mahashay.

Bengali sweets are perhaps the best part of Kolkata. They are tiny fudge-like delicacies of milk and sugar, kneeded to tender softness with time and dedication. Sen Mahashay was impressively busy. As the bagpipes moved farther away, the people dispersed from the shop, and Srotswini took the brief moment of silence to explain a bit about the candies, how women traditionally make them every year for holidays, how “people don’t have the time to make sweets anymore” because of the changing role of women in an India that continues to globalize away from its past.

V, like a moth drawn to light, approached the counter for a second round. She asked about a particular brown square, but Srotswini disagreed. “It’s not very good,” she said with usual frankness. “I recommend this one..” 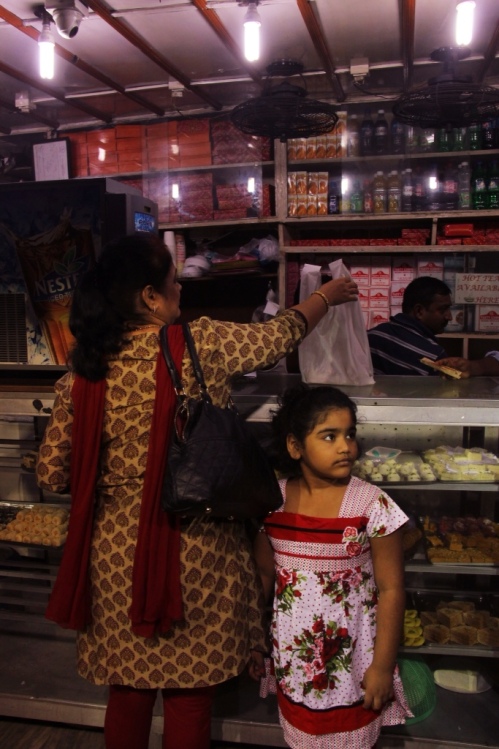 After a quick kachori with vegetable curry (the savoury highlight of the night, simply because it is fried but not that fried), we hopped into an auto-rickshaw to Kalighat, one of the city’s oldest and densest areas, based around a slew of back alleys leading to the infamous and historical Kalighat Kali Temple, which is dedicated to the barberous goddess Kali, often depicted holding severed heads and dancing on skulls with her tongue sticking out. (Srotswini: “I love her, she’s my goddess, but that temple is very dirty.”) Only now, at 7:30, are people beginning to eat dinner, but we beelined for more snacks, this time an egregiously oily and amorphous fried mutton chop at another local shop called Apanja, evidently famous by its lineup outside and low stock of food. 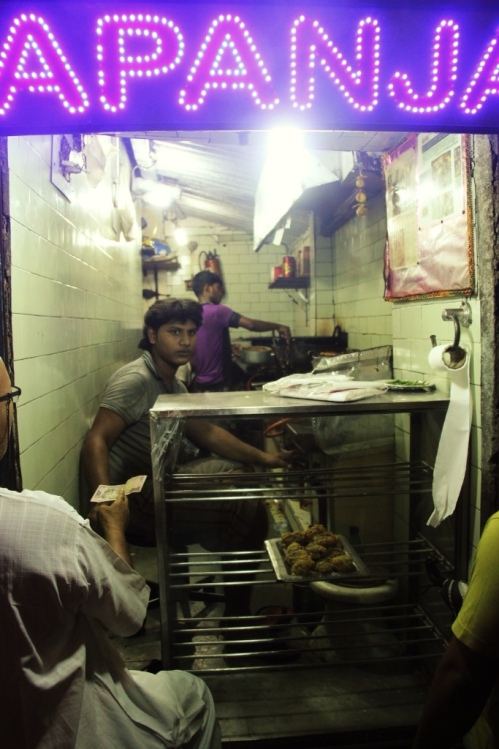 Kalighat is among Srotswini’s favourite neighbourhoods because of its locality, its sense of community and safety. Few crimes happen here; it is nothing like New Delhi; and the neighbourhood mothers and children can be seen parading the streets well after sundown, towards restaurants like Bachhan’s Dhaba, our last stop of the night.

Bachhan’s is a mid-sized restaurant, unusual for a city which commonly lacks anything between filthy street stalls and expensive over-air-conditioned restaurants. Here, Srotswini guided us towards kulfi, long cones of thick milky ice cream tossed in a plate with a side of vermicelli noodles soaked in coconut milk. The slimy noodles add little by way of flavour and are textually confusing; Srotswini admitted that neither she nor probably anyone else there had any idea why they do it. They just do, and everyone eats it. That’s what the dish is. It is a testament to Indian tradition, for better and worse.