THE SIGN SAID “EXHIBITION”, and the arrow pointed down. A wide and wrinkled woman in a blue uniform stood in the way. I began to walk past her, but she shifted to block me. She droned something in Hungarian. I apologised and clarified that I spoke English.

She stared at me with half-closed eyes. “Elevator, four minutes,” she said.

“I’ll take the stairs,” I answered, and moved to the dark green door. But when I pushed it wouldn’t open, so I turned to her. She did not try to stop me, nor do I think she even blinked, but she did spit out another Hungarian phrase for me to totally not understand. 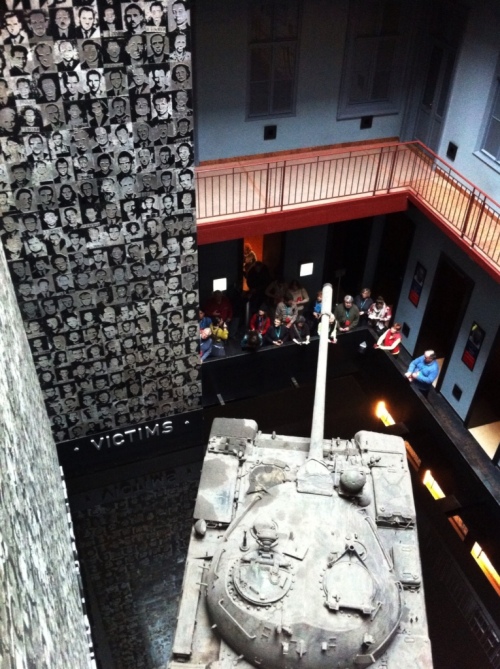 The elevator arrived soon after that, and she stood aside and gestured to it. I thanked her drily and walked inside. I pressed 1. Nothing. I pressed “door close”. Nothing. I tried them again, until I accidentally hit the basement button. Then the doors began to close, the lights turned off, and the elevator began moving—slowly. In the sinking blackness a TV flicked on behind me, and a four-minute interview began, in black and white, with an old Hungarian man describing an execution by hanging he’d witnessed during Hungary’s Soviet occupation.

Welcome to the House of Terror. It’s full of stuff like this: eerie exhibits, dreary employees and sad old men telling sad old stories about, somewhat broadly, terror. The museum is divided between the Nazis and the Soviets, but focuses heavily on the latter, with explanations of how Hungarian politics, religions and citizens were destroyed or manipulated.

But it’s all very cool, this museum. In fact, it’s one of the cooler museums I’ve seen: the hybrid of modern audio-visual art and archived history complement rather than fight for attention; it’s the kind of museum where you walk from a room wallpapered in colourful Soviet propaganda into a pile of gulag rubble with a pickaxe next to it and spotlight hanging overhead.

It is equipped for foreign tourists in the same way most of Budapest is, which is to say not at all. All the exhibits and wallpapers and signs are in Hungarian, and someone, at some point between the museum’s inception and today, realised this and printed out, on A4 sheets of white paper, explanations of the themes of each room. It’s a sloppy and heavy-handed distraction from the place’s artistry, but considerate all the same.

The House itself carries an unsettling history: it was the building headquarters of Hungarian Nazis, right-wing extremists and Soviet communists. Offices of generals and secret police have been restored, and the basement jail cells—cold, damp and windowless—stand among the creepier old rusty jails out there, with filthy toilets that somehow seem worse than just shitting on the floor.

When I stepped out of the elevator, I was met by a squat man with a bald spot and long stringy hair standing silently, guarding the chilly basement cells. I walked up to him to look out the cell bar window, and he did not flinch, but continued staring at me, to make sure I did not take photos or do anything else out of line. Whether these employees have been trained to enhance the atmosphere or not, I will never know, but their constant dull-eyed gaze was no less terrifying than anything else I saw that day.

2 thoughts on “What Budapest Calls Terror”