THE BIGGEST PROBLEM facing the only synagogue in the Amazonian city of Iquitos, Peru, is that nobody knows where it is. Hotel concierges won’t know what you’re talking about; tell a moto-taxi driver to take you there and he’ll shake his head briskly and drive away. Ask a middle-aged police officer wearing faded pink lipstick who’s standing idly at the corner of the Plaza de Armas, the city’s main square, and she’ll asked her two friends, a bank security guard and the man with a machete selling coconuts for a buck apiece before laughing at how nobody knows what you’re talking about. 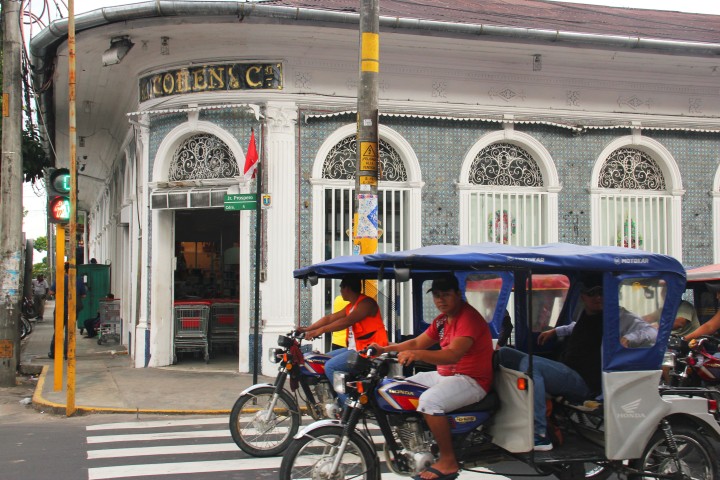 Iquitos is a difficult city by any measure – it’s hard to reach, hard to digest and hard to live in, buried so deep northeast into the Peruvian Amazon that you can’t even drive there, since no roads connect it to the outside world. To arrive, you must fly in from Lima or hitch a ride on a cargo boat, sleeping in hammocks and snaking through jungle rivers for up to four days straight.

Immediately upon stepping off the plane with my girlfriend and de facto Spanish translator, we met with a humidity we never knew existed – an inescapable 90 per cent year-round one, that keeps palm trees moist and the sky an unpredictable shade of grey. There’s no escaping it; you sweat just standing still. As we toured the city that afternoon, we found restaurants overpriced (after all, you’ve got to add the cost of shipping ingredients more than 1,000 kilometres from Lima into your bill), mosquitos buzzing everywhere, fearless dragonflies landing on our clothes and rampant poverty stifling riverside villages propped up by decrepit wooden stilts for when the water levels rise.

It struck us as odd, then, that this should be home to the second largest Jewish community in Peru.

I first read about these so-called “Amazonian Jews” in the context of their Israeli dreams: hundreds of Iquiteño Jews have made aliyah and moved to the Holy Land in the last two decades, mostly to the central city of Ramla. But that publicity is almost all that’s known about them.

What fascinated me more than those who left were those who stayed, that handful of practising Jews whose very existence faces constant pressure by, on one side, Lima’s Ashkenazi elite (who don’t consider the Iquiteños Jews at all, since they’re almost entirely descendants of Jewish men), and on the other by the allure of abandoning impoverished Peru for First World Israel. Who built the synagogue? How do they keep kosher? And why, frankly, do they bother with Judaism at all?

You can read the full story at the Canadian Jewish News, where it was a cover story for the January 25 edition.