Near the end of our six-hour bus ride from Arequipa to Cabanaconde, three awful, young French people boarded the bus, standing near our seats. The loudest wore a backwards cap and blue tinted shades, and I could see the flowing tattoo of an angel wearing armour on his arm beneath his too-tight white T-shirt. He could not stop talking, joking, tapping his hiking stick on the ground like a child with oversized biceps. Unable to sleep, I wrote in my notebook: Suddenly, I am no longer afraid of this bus crashing, for if we do, at least we will take this douchebag with us.

2. Not all paths are visible on maps.

If you see this scene near the beginning of your trek, you’ve gone the wrong way.

V and I found a rough map of the Colca Canyon, famed to be twice as deep as Arizona’s Grand, in an empty hostel in Cabanaconde’s central plaza. The path seemed clear: there were three lines that led from the town to the canyon, each one between three and four hours of downhill trekking. We walked straight until we found a dirt path. A local farmer assured us we could walk this way, so we continued for 25 minutes until we hit a dead end near a patch of corn crops. Three women called over to us, “Where are you going?”, to which we replied, “We don’t know!” We made our way over to the ladies, one of whom instructed us on how to reach the main trail. “If you want,” she said, “my son can show you the way for just a small tip.” We declined the offer and found the route in 15 minutes, clearly marked by arrows.

3. Sometimes, an oasis is just a mirage.

It turned out that we were hiking the most basic route, passing the canyon villages of San Juan de Chuccho, Cosñirhua and Malata—except in reverse. It began with a steep, zigzagging three-hour descent into the canyon, where we spotted a patch of green at the bottom, nearly a kilometre beneath us. The patch of green is called a lot of things—Sangalle, Oasis Paraiso Ecolodge, Eden, Las Palmeras. From high above we glimpsed bright blue swimming pools, verdant grass, several red-roofed private lodges and a bounty of trees for shade. We considered sleeping there, lounging the day away after a sweaty four-hour morning hike, but once we actually set foot on the property we noticed the dirt in the pool, the broken tiles in the bathrooms, the rotten avocados fallen from the tree and the army of flies colonizing the dining room. We stayed for a decent 10-sol lunch of vegetable soup and spaghetti with tomato sauce, and left within an hour.

4. The longest route may well be the shortest. 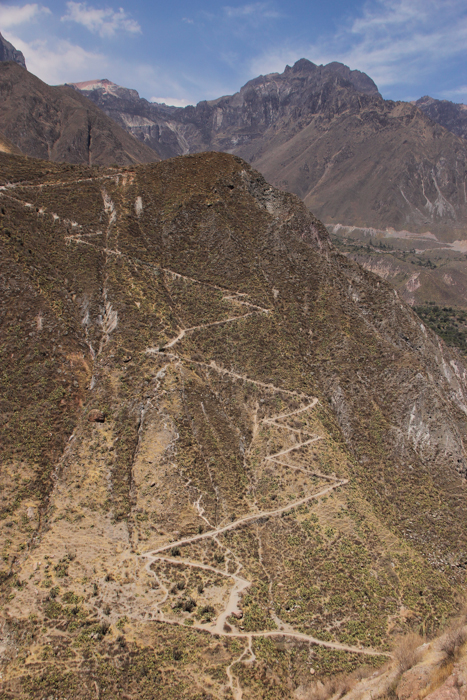 Leaving Oasis northbound, you’re faced with an hour of a steep switchbacking trail—or a steeper shortcut that cuts through the middle of it all. After climbing one shortcut that saved us maybe five minutes, we began ascending the second, which would turn out to be a much steeper, more treacherous route that slowed us down to a literal crawl. V and I are not great hikers—she, in her own words, is not so much afraid of heights as she is afraid of walking on ledges precariously near plunging drop-offs—so it probably would have saved us a lot of stress, and lost us no real time, had we taken the normal route.

5. Don’t be afraid to ask questions—just be sure to ask the right ones.

The first village we passed through was Malata. Addresses are letters and numbers painted on the sides of their houses—”I live at Q12,” you might say—and the houses themselves are pure beige cement, made from cement bricks and adhered with slop of the same material. But there is an old stone church and lovely village square, where locals have planted bright red carnations and one can sit with a bottle of water and enjoy the deep expanse of one of the world’s most beautiful rock formations. We asked an elderly local couple sitting in the plaza how long it would take to walk to San Juan de Chuccho; they told us we might be able to make it a little after sundown. We hurriedly crossed the town and neighbouring Cosñirhua in 30 minutes, and continued down the highway for 10 minutes more before realizing this may be the right route. We asked a woman approaching us how long it would take to walk to San Juan; she confirmed we could do it in an hour if we hurried. But after 20 more minutes, having turned a curve on the highway, we could suddenly see the real path—a direct route down to the water that would eschew the roundabout roadway we were on.

In other words, we knew the walk would be a bit over an hour. What we didn’t know was where the hell that route actually was.

6. Life’s simple pleasures are its most genuine.

The best kitchen in Malata after a hard day’s hike.

After arriving back in Malata for the night, dejected, we paid for a room at the growing hotel next to the central plaza. Rooms in Colca Canyon are often described as “simple,” but that doesn’t begin to describe them—this was literally a single cell with a bed, a tin roof and some bugs already inside. (Our window didn’t have a curtain; later that evening, while we were eating downstairs, they nailed one in.)

That said, I’d read on other blogs that the Colca villages have no hot water or electricity—neither of which seemed true. The first thing I did at the hotel was hop in the outhouse-style bathroom for a delightfully hot shower—forget the baby scorpion crawling around the bathroom wall, the dirty seat or the lack of soap; hot water is a blessing after a day of hiking.

Our dinner, prepared by the matron of the house, was a single potato, half a corn cob and the butt end of a deep-fried guinea pig. We watched as the kind Andean woman charred the animal’s skin, despite squealing cries from its fellow guinea pigs, caged up a few feet away. Chickens clucked around our feet while we enjoyed two cups of anise tea afterward, and I couldn’t imagine a better meal for the night. 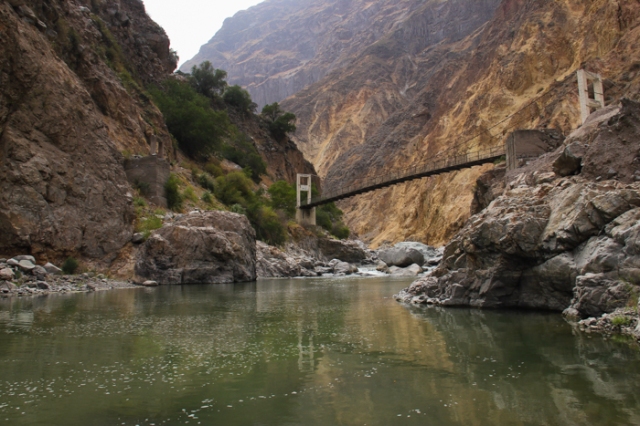 We’d heard San Juan de Chuccho described as more touristy than Malata, with a hotel and lunch spot for guided tours. But as we walked through it, we passed only a handful of lodges, including Posada Gloria, notable for its vibrant grass and clean, modern-looking cabin exteriors. (The interiors were a different story, as mouldy and spare as anywhere else in the valley.) We backtracked to Gloria’s after realizing that might in fact be all this village offers, and were right to do so—apparently one can only reach the quickest route back to Cabanaconde through her bucolic property. While V used her bathroom, I watched the tour group prepare their morning hike out—some French, some Spanish, one English, they were the perfect postcard of hipster travellers, with cheap sunglasses, kitschy Peruvian hats, Bob Marley tank tops and sunburnt arms. They snapped a few group selfies and continued in the direction from which we’d just came.

8. The nice thing about spiderwebs in your face is they prove you’re going the wrong way. 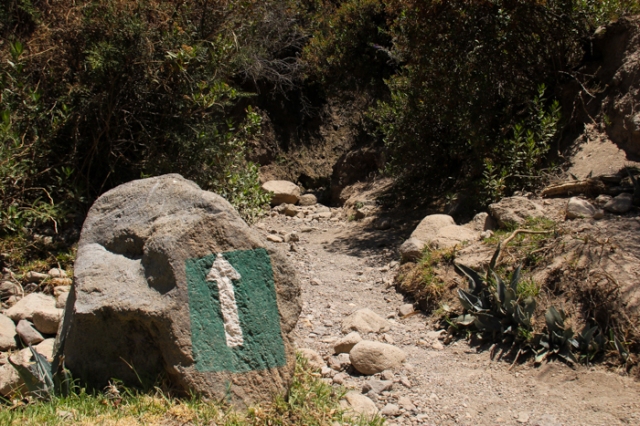 Gloria told us the river was just a 20-minute walk past her house. But the path is rarely clear in Colca Canyon, especially when you’re doing it in the opposite direction and every arrow you pass is pointing the wrong way. Long story short: if you are taking this route, and you pass Gloria’s and stay on a path that leads you through a donkey and cow farm, and for some reason you keep going because you’ve convinced yourself that this path must exist for a reason, and that reason must be tourism, use the fact that your face will keep hitting spiderwebs as a hint that you’re probably going the wrong way.

About halfway back up the canyon, during one of our scheduled hourly snack-and-water breaks, V and I hiked until we found some shady park of a rock wall to sit under. It was 11 a.m., so our options were limited. As soon as I found one, I began to crouch down, when I heard V—

I froze, turned my head to the right, and saw what had worried V—that I was about to sit down, my head inches from a bustling two-inch-wide nest of wasps.

We walked 10 more minutes and found somewhere else to sit.

10. When in doubt, let nature be your guide.

With only two hours to go before we climbed out of the canyon, we met a golden stray dog. He had a tendency to run right up to the edge of the cliffs and stare down dramatically. I named this dog Yoyo, because though he would constantly run ahead of us, making me believe he’d left us behind, he always came back—usually 10 minutes later, when we’d turn a corner and find him sitting in some shady spot, panting from dehydration and waiting.

(N.B.: At Oasis, we met another couple with a large, scruffy white dog who apparently met them the day before near the start of their hike, followed them all the way down the canyon, slept outside their hotel room in San Juan, and trekked with them to Oasis—nearly 15 kilometres of hiking. So apparently Colca Canyon dogs are pretty clingy.)

We tried to feed Yoyo some peanuts and water, but he didn’t seem interested in either—or else was too suspicious to let us get that intimate. Nonetheless, he followed us for the next two hours, up and out of the canyon, as a thundering storm cloud began slipping over our heads. We were exhausted by this point, but I kept egging V on to push a little harder, because the last thing we needed was to prolong this trek by getting caught in a thunderstorm. Lightning flashed above the village of Tapay in the distance, and Yoyo ran ahead.

11. When you see an opportunity, take it.

Once we’d cleared Colca Canyon itself, and we realized the storm was shifting away from us, we started the hike back to Cabanaconde itself. The three of us passed the under-construction museum, little streams irrigating farmlands and spray-painted signs for outhouses in the middle of fields for 30 minutes before a minivan, driving in the opposite direction, slowed down. The driver stuck his head out: “Chivay?” he called.

Chivay was the town we were headed to later that evening—a charming little spot known for natural hot springs and rich Andean heritage, just over an hour’s drive from Cabanaconde. But the offer was here, right now—if we could wait an hour for lunch, we could save hours later in the day. For eight soles a piece we hopped in this stranger’s car, snacked on some crackers, fell asleep and realized we forgot to say goodbye to Yoyo.

I hope he made it to Cabanaconde, at least.

← A Long Way Back: Stories of Travelling Home is Now a Real (e-)Book
Searching for the Amazonian Jews of Peru →