I HAVE STARTED SPEAKING TO FEWER PEOPLE for longer, as a result of having more contacts in Europe than anywhere else outside of Canada; this means more drinks with semi-strangers, more venturing parties I would not normally find myself in, more desperately trying to not feel so alone all the time. In many cases, the opposite becomes true. So for this edition of “Stories Left Behind” I have fewer but longer anecdotes, and I have left East Europe with high hopes that one day, somewhere, I will meet these characters again, and they will be exactly the same as I remember them. 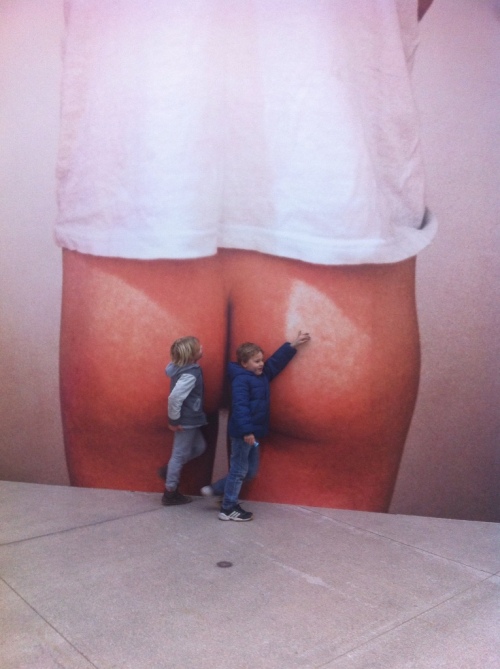 I was invited to the Viennese gallery opening of a famous modern English artist, Sarah Lucas. I could pick her out immediately from the crowd, made up mostly of Aryan-looking folk in Marino wool scarves, leather gloves and fine tweed jackets; she had stringy blonde hair, a British smile and a thick wool overcoat that hid her hands in the sleeves. She spent much of the night looking awkwardly at nothing, and disappeared early.

Ms. Lucas had created two large statues of penises, two gold-plated pumpkins that looked like penises, and two humongous square photographs of herself at a younger age, one which showed her nipples through a cut-up shirt, and another of her backside, revealing her bare bum and a slogan on her shirt: “COMPLETE ARSEHOLE.” “I hope you will return tomorrow, when the exhibit is finished,” the curator announced to the crowd in the lobby. My friend who had invited me, an art history teacher, leaned in and whispered, “That’s the hens.” Apparently the Viennese group hosting Ms. Lucas has created a large henhouse in the space, and everyone is excited that the hens should fly up over the walls, lay eggs everywhere and shit all over the art. 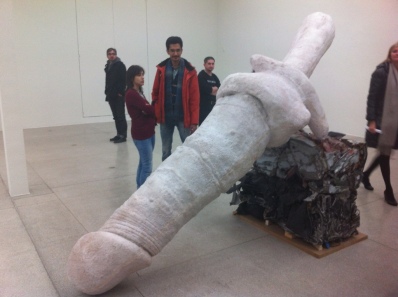 I met some of my teacher-friend’s students and alienated myself immediately.

“What do you study?” I asked them.

“Oh! So you’re not artists, you’re actors,” I tossed out without thinking, only to receive a handful of cold glares.

For some reason I felt compelled to try and impress these spoiled European 20-year-olds by trying to be witty about the paintings downstairs (“This one here? This reminds me of rock-em-sock-em robots, but with a penis and vagina”), but ultimately wound up segregating myself further. Perhaps I am simply not European enough. After a neat short film about a man performing a triathalon across Europe to visit Chopin’s grave, and I think being haunted by an orchestra that kept hilariously popping up in various rooms of his house, I tried to engage two of them outside, but was shot down by a fiercely silent fake smile, and so meandered back to my hostel, alone and confused.

“Every Monday we exchange stories,” the quiet sign read. “Tell us yours. We tell you ours.” I happened to be in Prague that Monday, so, curious, I walked in the quirky building and found a half-Kazakh, half-Korean girl asking the receptionist if anyone had inquired about her project yet. “Is is about the stories?” I asked. She looked amazed and relieved: “You have a story? Yes, please, come this way!”

It turned out not to be the storytelling circle I expected, but a sort of bizarre advertising campaign run by Lowe Prague, the ad company that has inherited this 100-year-old cubist house near Vyšehrad, which they wanted to show off to the public; their peculiar method of advertisement is aimed at the very unusual sort of person who is attracted to storytelling. (Lucky for them, I am just that sort of person.) Because the girl spoke Russian, English and Czech, I thought it fitting to tell my Varanasi salesman story. I asked her what story I received in exchange, and was disappointed to find out she had already told it: it was the story of the building, the history of which she wasn’t even very certain of, but which she assured me was a very experimental structure outside the city centre, and was used as a kindergarten by the communist regime. Feeling a bit cheated, I left 10 minutes later.

There is a video game called DOTA 2, and it’s enormous. It’s so big that international competitions are held with cash prizes of several thousand to a million dollars for the winner. Teams grow so popular that some major companies sponsor them with millions of dollars. This is what brought a small group of Romanian dudes to Belgrade in November. The lone non-gamer among them was a part-time standup comic (apparently the money is great over there), part-time graphic t-shirt designer (a playboy bunny once wore one of his designs and posted the shot to Facebook; “That week I sold 100 shirts,” he claims), part-time urban planning student with dreams of opening a free arts space in Bucharest, and part-time video game enthusiast.

While his friend, a sunken-eyed boy with quick speech and no social skills, droned rapidly on about the strategy of the game at a basement party in Belgrade, his taller friend explained to me that he was sure to win the $7,000 prize the following day, provided they aren’t so hungover that they oversleep. If all goes well, he plans to organize a similar event in Bucharest. Which job will become his full-time one, he doesn’t know.